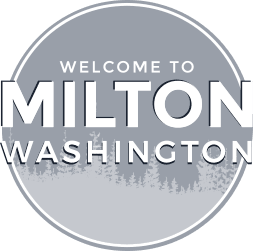 During the early 1890’s, a mill was constructed amidst towering evergreens on a hill overlooking the Puyallup Valley. The first settlement, known as Mill Town, was made up of a handful of homesteaders and the lumber camp workers who furnished timber to feed the mill. The name became Milton only after the U.S. Postal service rejected the two-word Mill Town moniker. Besides, government officials said, Washington already had one Mill Town. Residents were actually quite pleased with the change as the town was then named after the renowned poet.

The construction of the Interurban Railway in the early 1900’s, running through Milton between Seattle and Tacoma, helped Milton’s growth. Shortly after the first public school house was built in 1903, the Milton Land Company filed the first town plat, offering land for as little as $29 an acre. In 1905, the first post office opened, and Milton became official two years later, in 1907, when the community voted 46-18 in favor of incorporation.

Milton gradually shed it’s dependency on timber and grew into a bedroom community mainly for those who commuted to the larger, surrounding cities to work. Milton started to provide its own electricity in the 1930’s, and later experienced a burst of both geographic and economic growth due to a 1.8 million-dollar sewer project completed in 1971.